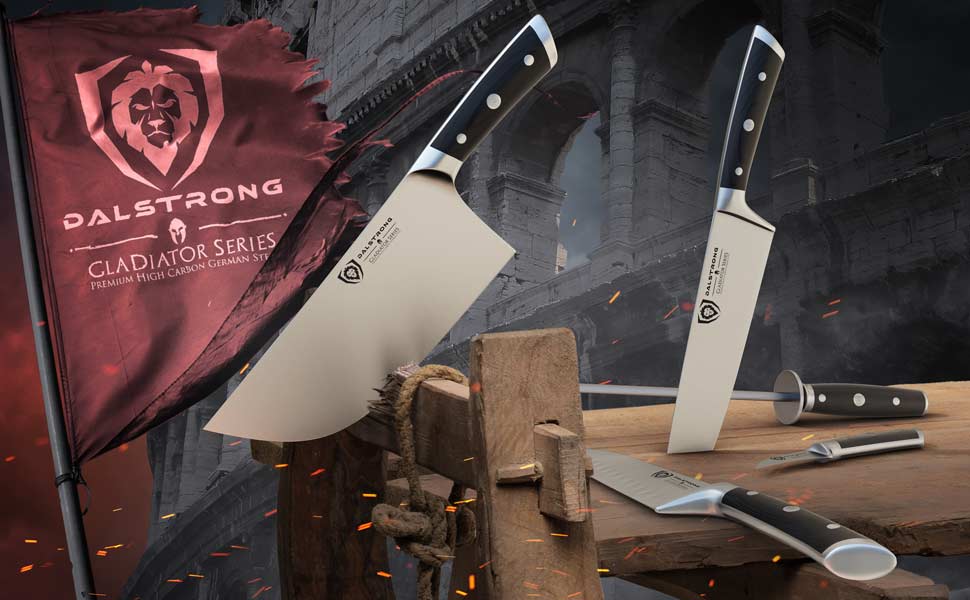 For ultra-thin, ultra-precise sashimi slicing, the Gladiator Series 10.5” Yanagiba is a Japanese-style sushi expert forged of high-carbon German steel. The Yanagiba is a thick, heavy, single-bevel slicing master traditionally used in Japanese cuisine to prepare raw fish. The 10.5” blade is perfectly suited for cutting through flesh in a single stroke without pulling or tearing in order to maximize flavour and taste while the 3.5mm blade gently pushes meat away from the blade. Combining elements of this traditional Asian style knife with Dalstrong’s signature Gladiator Series features, the Gladiator Series 10.5” Yanagiba is the perfect instrument for any task including the preparation of raw poultry slicing, flank, hanger steak, pork tenderloins and other moist and tender meats.

The Gladiator Series blade is precision forged from a single piece of imported premium quality, high-carbon ThyssenKrupp German steel, ensuring an ultra sharp edge with excellent wear and stain resistance. Hand sharpened to between 16 and 18 degrees per side, the Dalstrong Gladiator Series Yanagiba knife is a high performance kitchen workhorse, ensuring ultra-thin slicing with minimal effort, maintenance or clean up required.

The knife is as pleasing to hold as it is to look at, featuring a perfectly engineered balance with a satisfying presence. The hand polished bolster adds counterweight and, while the triple rivets (with signature Dalstrong center rivet) in the handle ensures the highest level of strength and robustness. Included is a water and stain resistant, BPA free protective Dalstrong PerfectFit sheath.

The Art of Steel.

Knives To Build A Career On. A Community Of Chefs To Belong To.

Over Seventy-Five Thousand Chefs Have Switched to Dalstrong

From executive chefs to home chefs and everyone in between, Dalstrong Chefs are treated like family. Over seventy-five thousand chefs have switched to Dalstrong for our superior quality, unconditional support, and loyal community. It may be cliche, but we truly care about you and the blades and products we painstakingly design and develop. From the tinest packaging detail, to hundreds of hours of design and testing, each knife is a work of love, dedication and expert craftsmanship.

Dalstrong supports you, our chefs, everyday and in every way we can. Your Dalstrong knives work alongside you, day in and day out, making you more effective, creative, and precise in the kitchen; delivering plates you can feel proud to present. These are knives to build a career on, and tens of thousands of professional chefs have done just that.

From cooking competitions (Dalstrong supports chefs across the country building their reputation), to charitable events (we donate knives to those in need with culinary aspirations), Dalstrong loves the community, loves chefs, and the men and women who prepare food for us all each and everyday. From the heat of the professional kitchen to a simple meal for one, Dalstrong stands beside you every step of the way.

Dalstrong Is Out To Turn An Old Industry On Its Head

We love cooking. We love design and craftsmanship. Most of all though, we love bringing a feeling of pure satisfaction to chefs around the world who use our tools day in and day out.

Whether you’re a hobbyist or pro, our aim is to enhance the experience of your culinary creation.

Dalstrong is the new guy on the block. From a foundation of love and respect for an ancient craft, we layer on modern thinking and methods to create beautiful and innovative knives at far greater worth than traditional brands. Don’t just take our word for it; look what others are saying, across the web, social media and in professional kitchens around the country. Our goal is to stir up a stodgy old industry with tools chefs love and trust, with innovative design and improvements. And as a company, we’re out to build life-long relationships with exceptional products and exceptional attention to your individual needs as a chef and customer. Come cook with us. Like you, we strive for greatness every day.

Check Below for Most Attractive items: